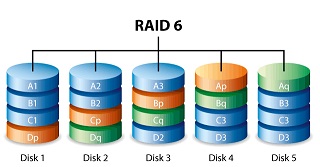 RAID 6  is further step for Data Warehouse technologies, especially designed for less reliable, but much bigger in capacity and chipper desktop class hard drives.
In RAID 6 data is striped across several physical drives and dual parity is used to store and recover data. It tolerates the failure of two drives in an array, providing better fault tolerance than RAID 5. It also enables the use of more cost-effective, but less reliable, ATA and SATA disks for business critical data.

Whether it's a RAID 6 logical disk failure or severe physical drives damage, ACE Data Recovery can help. We utilize the advanced and innovative techniques, proprietary equipment and software to recover your RAID 6 very fast and efficiently, while maintaining the integrity of the data. With so many successful RAID 6 recovery cases, we have already dealt with almost every possible RAID 6 failure scenarios.

This RAID level 6 is similar to RAID 5, but includes a second parity scheme that is distributed across different drives and therefore offers extremely high fault tolerance and drive-failure tolerance. RAID 6 can withstand a double disk failure.
RAID 6 requires a minimum of four disks and a maximum of 16 disks to be implemented. Usable capacity is always 2 less than the number of available disk drives in the RAID set.
With less expensive, but less reliable SATA disk drives in a configuration that employs RAID 6 , it is possible to achieve a higher level of availability than a Fiber Channel Array using RAID 5. This is because the second parity drive in the RAID 6 RAID set can withstand a second failure during a rebuild. In a RAID 5 set, the degraded state and/or the rebuilding time onto a hot spare is considered the window at which the RAID array is most vulnerable to data loss. During this time, if a second disk failure occurs, data is unrecoverable. With RAID 6 there are no windows of vulnerability as the second parity drive protects against this. 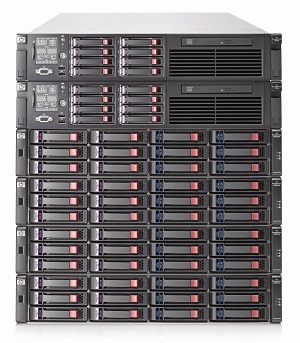 RAID 60 combines multiple RAID 6 sets with RAID 0 (striping). Dual parity allows the failure of two disks in each RAID 6 array. Striping helps to increase capacity and performance without adding disks to each RAID 6 array (which would decrease data availability and could impact performance in degraded mode).
RAID 60 comprises RAID 0 striping across lower-level RAID 6 arrays. The benefits of RAID 6 are gained while the spanned RAID 0 allows the incorporation of many more disks into a single logical drive. Up to two drives in each sub-array may fail without loss of data. Also, rebuild times are substantially less than a single large RAID 6 array with the same number of physical drives.
RAID manufacturers differ vastly in their designs of the internal components and circuitry of their hardware and an in-depth knowledge of these designs are crucial for successful data recovery. But because manufacturers do not disclose this information, RAID recovery techniques  require many years of development and reverse engineering in order to determine which ones are the most effective.

Being experts in the recovery of both single hard drives and striped volumes perfectly places ACE Data Recovery to recover your critical files from this and any other type of array/volume.

I was amazed by how quick they were able to complete our project. We mentioned we were a business and how time was crucial. They estimated the data recovery would take 5-7 days. We were ok with this since we figured we had no choice and would simply have to be patient. Within a day, they called and explained what happened to our hard drives and what the procedure would entail. Hours after we authorized them to proceed, we got a message that the service was completed! We were very pleasantly surprised. The service was excellent, and the individuals we dealt with were very courteous, understanding and knowledgeable.