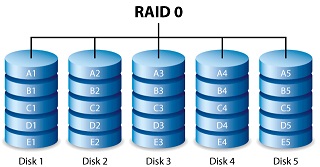 RAID 0  is known as the striped set without parity. RAID 0 provides improved performance (if proper RAID controller used) and additional storage, however, without any parity blocks, RAID 0 provides no fault tolerance. So, if even single disk failure occurs it will take down whole array. The more disks in the array the higher the chances of the RAID 0 failure. Single disk failure destroys the entire raid array because when data is written to a Raid 0 drive, the data is broken into fragments (stripes). The number of fragments is determined by the number of disks in the drive. The stripes are written to their respective disks simultaneously (in theory, but it depends on what kind of RAID controller and disk drives used) on the same sectors. This allows smaller sections of the entire chunk of data to be read off the drive in parallel, giving this type of arrangement some bandwidth advantage. More disks in the array mean higher bandwidth, but also makes gives you greater risk of data loss. 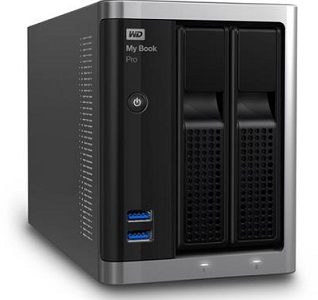 RAID 0  can be created with hardware or software. RAID 0 is frequently used in many different types of servers, external hard drives, NAS units, Snap Servers, and in certain desktop computers. RAID 0 data recoveries  require all disks to be present, and unmodified. Please contact ACE Data Recovery regarding your data loss/hard drive failure prior to attempting to recover the data from the remaining disks.

The performance benefit of RAID 0 comes at a price; unlike other RAID levels (which by definition provide redundancy of at least one drive failure) there is no redundancy. As such, recovery of the RAID 0 array following even a single drive failure becomes a case of repairing and getting the failed drive working, cloned and then extracting the data from the whole raid array. This is the only reliable way of performing a full and complete RAID 0 data recovery. Recovery attempts can be made on failed arrays with missing disks, however, very small files - (smaller that stripe size) may be recoverable, but in most cases the process used to recover them loses all file and directory structure.

RAID manufacturers differ vastly in their designs of the internal components and circuitry of their hardware and an in-depth knowledge of these designs are crucial for successful data recovery. But because manufacturers do not disclose this information, RAID recovery techniques  require many years of development and reverse engineering in order to determine which ones are the most effective.
Being experts in the recovery of both single hard drives and striped volumes perfectly places ACE Data Recovery to recover your critical files from this and any other type of array/volume.

"They had recovered my entire drive"

During the 4th of July storm in the DFW area, we discovered that several electronic devices took a hit. One of those devices was my NAS device that had a 1TB RAID 0 with redundancy. I took my drive to ACE Data Recovery and within 2 weeks they had recovered my entire drive. Needless to say, I was very relieved and also appreciative of the work they had done. Kudos to the group at ACE Data Recovery in Dallas.