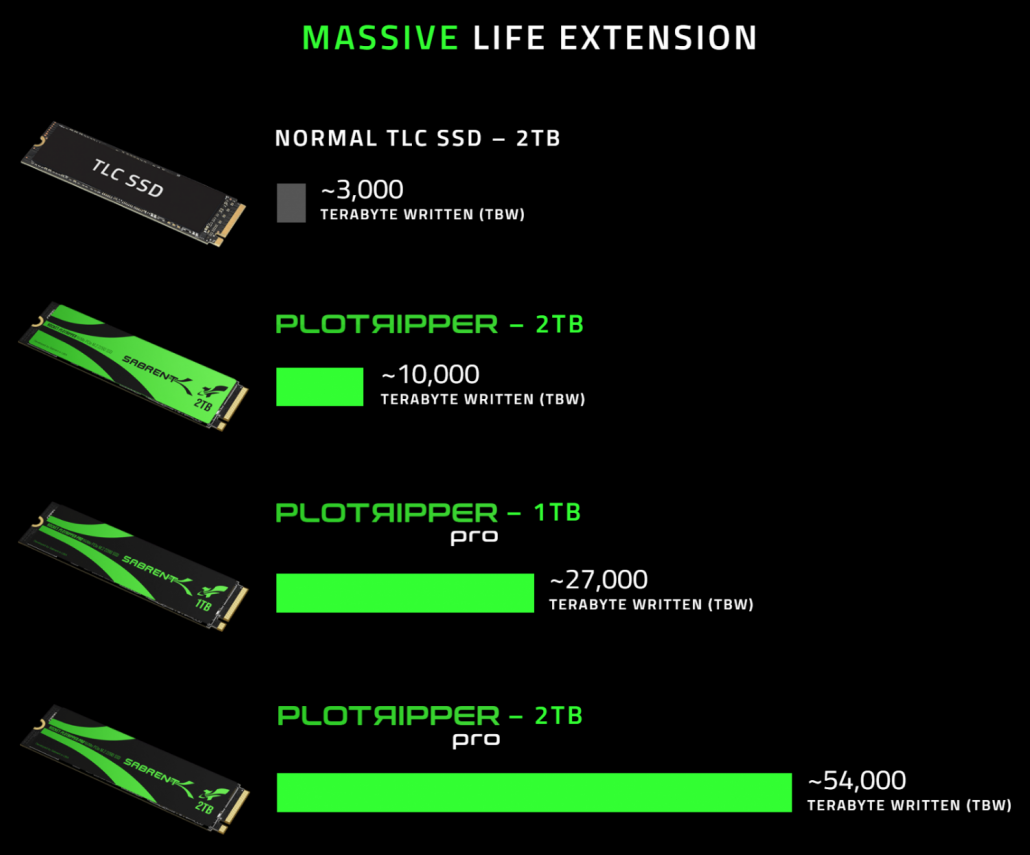 Sabrent has prepared a new line of SSDs designed for hardcore Chia coin (XCH) plotting. The series will consist of two models: the standard Plotripper SSD and the Plotripper Pro, with the main benefit and difference being the higher TBW in the Pro model.

Chia cryptocurrency is based on a proof-of-space-time consensus algorithm and a blockchain network. It involves a so-called Chia farmer or “prover” sending such a proof to a verifier. The proof is that some amount of disk or SSD space is actually used to store some specific data. Chia calls itself “green” as it relies on storage (fast, SSD, storage for plotting and high capacity, HDD, for farming) versus GPU/CPUs, and Chiacoin farming requires less processing. For plotting, it's recommended to use fast storage solutions such as PCIe SSDs, but it's also important to consider the SSD drive endurance due to the amount of data it moves inside the device.

Since even the best consumer-grade SSDs are not designed for write-intensive workloads, they can easily fail after weeks of plotting, and that's where the Plotripper and Plotripper Pro SSDs come in. They leverage the new Phison E18 controller and Micron NAND combo, which delivers very impressive performance across the board.

Besides, the Plotripper and Plotripper Pro SSD drives have been designed to endure the harsh writing cycles for Chia plotting and boast phenomenal endurance. The mainstream Sabrent Plotripper SSD offers a 10,000 TBW for its 2 TB capacity, which is already one of the highest available in consumer drives at the time of writing. The Pro SSDs, however, promise 27,000 TBW of endurance for its 1 Tb capacity, and a whopping 54,000 TBW endurance rating for the 2 TB one. Those figures are comparable with endurance offered by enterprise and Intel Optane SSDs.

Availability and pricing have not been released, but Sabrent has said that Plotripper will be the “best unit cost for plotting.”