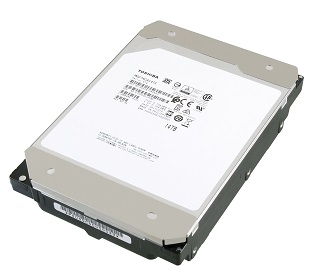 Toshiba has just announced the world's first 14TB Conventional Magnetic Recording (CMR) hard drive that is a part of Toshiba's MG07ACA enterprise series.
In addition to the massive 14TB 9-disk drive, the hard drive lineup is also getting a new 12TB 8-disk drive. Both versions are helium-sealed with a 3.5-inch mechanical design, resulting in better storage density and a low HDD operating power profile. The series also utilizes Toshiba Group's laser welding technology to ensure the helium remains securely sealed inside the drive enclosure.
The drives support a SATA 6Gbit/s interface and 72,000 RPM access performance. The 9-disk 14TB models achieve a 40% increase in maximum capacity over previous MG06ACA 10TB models. Besides, the 14TB model is 50% more power efficient than Toshiba's previous MG06ACA line of 10TB drives. Conventional magnetic recording drives such as these are faster than similar models that use shingled magnetic recording tech.

The drive is aimed at cloud storage businesses providing a large amount of storage on more traditional media. According to Toshiba, the new hard drive gives enterprise customers the highest capacity HDD available in the market today for existing server and storage system architectures.

Toshiba's MG07ACA series 14TB hard drive is a good solution to meet the storage needs of large hyperscale and cloud companies but like all hard drives, it may sooner or later fall victim to logical or physical failure. Sudden media issues can mean serious downtime and lost work and to recover critical files, businesses will need to contact a professional data recovery services provider like ACE Data Recovery team.

ACE Data Recovery team has a nationwide reputation for industry-leading results because they have technology and experience to recover data from every make and model of storage media and use state-of-the-art equipment to handle any data recovery process. All data recovery operations are performed in the company's labs with Class 100 clean rooms for HDD recovery. ACEs retain market leadership in IT technologies and can recover data that other companies can't.