SSD Data Recovery Can Be Complex

ACE Data Recovery provides recovery on a full range of solid state drives and operating systems based on MLC or SLC NAND flash memory technologies for all makes and models of laptops and notebooks.
Unlike hard disk drives, solid state storage devices have no moving parts. This creates a wrong impression that data is much safer on SSD.  However, this is not the case.  SSDs have higher vulnerability to some defects that typical hard drives are not as vulnerable to, including abrupt power loss, magnetic fields and electric charges compared to normal HDDs.  Also, considering the fact that the SSDs have a limited number of write cycles, the ability to write to the device will eventually wear out, thus leading to potential data loss.

Most SSDs use complicated controller technology to extend the reliability and speed of storage.  The architecture inside a high performance SSD and the corresponding SSD data recovery is more complicated than that in most RAID systems. The algorithms which map logical addresses to physical media locations vary from manufacturer to manufacturer  and details are closely guarded commercial secrets. Read more about SSD architecture ..

Our R&D team developed an advanced SSD data recovery process of rebuilding multiple sets of NAND flash dumps, unscrambling the code and  then taking the numerous unscrambled sets and assembling them into one single drive image. No matter how dependable the storage device, sooner or later it wears out. Often, this occurs without warning after tens of thousands of write/erase cycles. In much the same way a rechargeable battery loses its charge after several hundred cycles, non-volatile solid state storage components can lose their ability to retain data after  thousands of write/erase cycles. This is usually specified by component vendors as  endurance. 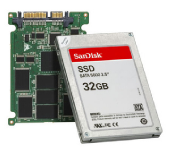 When a block loses its ability to retain data or when data errors occur that  cannot be corrected by the drive’s error correction (ECC) algorithm, the block is swapped with one from an  available spare pool. When the spare blocks are exhausted and another error occurs, the  solid state drive reaches critical failure state and needs to be replaced.  Solid state storage management algorithms such as advanced ECC and wear leveling  over the entire flash media maximize the drive operating life and extend system-level  endurance.